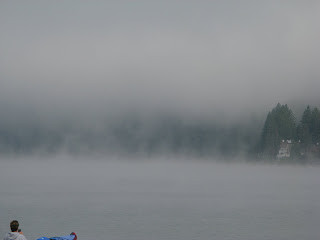 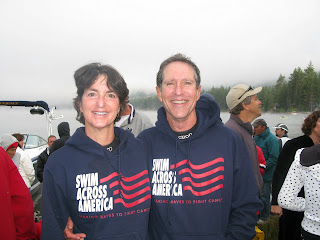 Richard and I drove up to Donner Lake on Friday evening, arriving at the Inn at Truckee at about 10 PM. We had a great drive up and even brought Daisy (our adorable dog) along, who, for a mere $15 extra could stay with us! This was her first time at a motel, and I must say, she loved being on vacation with us! We set the alarm for 6:45 AM, had a good night's sleep, and woke up ready for our 2.7 mile swim across Donner Lake. As you can see from the photo above - the weather, well, shall we say, was not what we were expecting or hoping for. I had heard that the beauty of this particular swim was the beautiful scenary. The gorgous mountains. What mountains, what lake?? We could not see a foot in front of us. The race directors, to their credit, postponed the start of the swim by about 1/2 an hour. This was perfect, because by about 9:00, the fog lifted and there was the lake and the beautiful mountains. The temperature of the water was about 66 degrees, and the air temperature was about 55 degrees.
The race began. Richard and I stayed together for about 2 minutes. Then I lost him, and I actually had a wonderful swim, alone. I loved it. I was toasty in my wetsuit, was trying to enjoy the beauty, and really wasn't "racing" by any means. I thought of it as merely a long swim after just jumping in; a metaphor for what was about to happen to me next week. A a long recovery after just jumping in to surgery. So, the swim, it turns out, was much easier than I thought it was going to be. It went rather quickly, I thought. I finished in 1 hour and 18 minutes. I was 15th overall in the "wetsuit division", although most swimmers did not wear wetsuits (I cannot imagine how they did that!). Richard followed not too far behind me at 1 hour and 27 minutes, which was an excellent time for him - I was very proud of him.
Now, Richard, was absolutely freezing after the swim. He wore a sleeveless wetsuit, which I think was the problem. He could not stop shaking, and could not get warm. We make it back to the Inn, took long hot showers, and went out for a fabulous breakfast in Truckee. We felt good about our accomplishments. The interesting part was the analogy between the swim and my cancer. I was much more worried about the swim - the cold, the altitude and the distance, than Richard was - and it turned out to be much easier for me than I thought it would be. Richard, however, was less worried, and is always, the eternal optimist and the king of denial. Everything will be OK (and it usually is). However, Richard found the swim a bit more difficult than he thought it would be. It was longer and much colder than he anticipated. So, maybe, what lies ahead of us, will turn out to be a little bit easier than I am expecting, and a little bit harder than Richard thinks it is going to be. But in the end, it's going to be just fine.
We made it though the swim and we are both OK. We will make it through the surgery, and we are going to be more than OK. That is my greatest wish.
Posted by Susan Helmrich at 11:51 AM 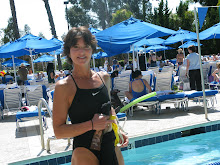